Nancy Thury, beloved wife, mother, grandmother, sister, auntie, second-mom, and lover of dogs died Tuesday, August 18th at Sanford hospital in Bismarck, ND from an unexpected illness. Nancy is survived by her husband, Richard Thury of Lawrence, KS/Parshall, ND; a son, Jeremy Thury, daughter-in-law Melissa, and two grandchildren, Ramsey and Merritt, of Jamestown, ND; a daughter, Jenni Leiste, husband Kyle, and four grandchildren, Oliver, Elijah, Emerson, and ILiza of Baldwin City, KS. Nancy also adored her two furbabies, Murphie and Finlie. According to her human children, she loved the fur children just as much as she did her human children.

Nancy often rolled her eyes and let out a deep sigh when her daughter would say things, she considered to be funny. In tribute to her dear mama, Jenni offers the following “I think I’m funny” obituary. The goal is to bring the words “some people’s kids” to the memory of those who knew and loved Nancy.

Nancy grew up in small town, Parkston, SD, where she met a fine young man fresh out of the Navy named Rick. After Nancy graduated high school, she attended technical school in Sioux Falls, SD. Not too long after, Nancy and Rick got married on September 8, 1979, then eventually settled down in Rugby, ND, with their two children Jeremy and Jenni. After living in Rugby for 7 years, they found the place they would call home for the next 35 years, Jamestown, ND. The family planted roots in their small town until just recently. Rick and Nancy planned to live in Parshall, ND for half the year while living the remainder in Lawrence, KS. Although Nancy did not get to settle into her new Kansas home, Rick will be greeted by eager grandchildren who are ready to teach him how to catch catfish.

Nancy spent years and years decorating the shirts, hats, cars and signs of Jamestown. It would be a lie to say Nancy did not make her mark on her beloved community. She was lucky to have amazing people to work with that made her work feel less like a job.

“Rick and Nancy”…It flows off the tongue like “peanut butter and jelly”. This road trip duo was rarely seen apart. Their hobbies aligned — hunting, fishing, camping, cooking, bowling, softball and they even had this moment of golfing. This long-lasting marriage even survived 3 consecutive summers of road-tripping cross country to visit every Major League Baseball complex in the United States. But these two just had their own way. Rick would drive, while Nancy would sleep, relax and spoil her puppies. When it comes to fishing, if you were to add up the amount of hours Nancy has spent on a boat…it would be, like, a lot of hours! Nancy’s love for fishing was infectious! The fishing bug quickly spread between her in-laws and friends from all around. If you ask Rick, he is just the boat driver. Nancy did all the work pulling in fish after fish. Nancy’s commitment to boating and fishing was so strong that just this last summer, she took an unintentional dive in the cold water while helping dock the boat. (She INSISTED it was RICK’S FAULT).

No matter where Nancy lived, you could always find her on the softball diamond, whether she was playing or running the entire program to ensure her daughter had a team to play on. That’s one amazing thing about Nancy, if something didn’t work out the way it needed to, she would step in and make it happen. She was never afraid to step in and help, no matter who needed it.

Nancy liked what she liked and there was no changing her mind. If you passed her a bottle of Hunts ketchup, she would shudder as if you just passed her a can of sardines. Valentinos is the only Italian Restaurant that mattered. Her friends and family were priorities in her life. Dark Dove chocolate always rode around in her pocket and laundry frequently required a re-wash because of it. Nancy loved pickles more than anyone really should. I believe Thelma is her current dealer. Thelma may need some new customers to make up for the loss of Nancy’s sales.

Nancy was preceded in death by her parents, Lucile and LaVern Wermers; brothers, Dan and Charles; nephew Mark and great niece, Adrionna Wermers.

This smart-ass firecracker of a woman is going to be deeply missed!

Mom, don’t get too many puppies while you’re in heaven! …When pigs fly! 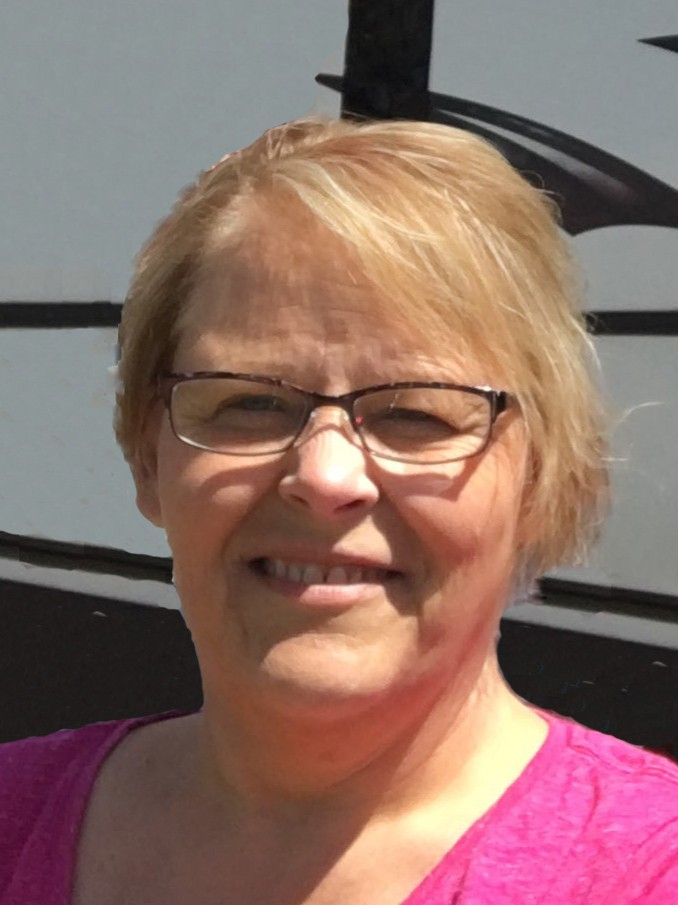