We see that you have javascript disabled. Please enable javascript and refresh the page to continue reading local news. If you feel you have received this message in error, please contact the customer support team at 1-833-248-7801.

Robert D. Schrade was born October 16, 1928, the son of Vern and Hattie (Krubeck) Schrade. He grew up on the family farm near Buchanan, ND and attended school in Jamestown. Bob returned to the farm to raise small grains and cattle with his father. He was united in marriage to Mildred Nogosek on January 29, 1952 at St. John’s Catholic Church, Kensal, ND. They made their home on a farm south of Kensal where they continued to farm and raise three boys. Bob was a member of the local wildlife club and enjoyed dancing, hunting and fishing. They moved to Jamestown in 1979 and Mildred died on July 4, 2007.

Bob is survived by his sons, Steven Schrade, John (Brenda) Schrade, and Don (Sheana) Schrade; grandchildren, Jamie and his children, Aspen & Alexa; Stacey and her children, Finley, Teagan and Emmie; Mathieu and his son, Isaac; and Amanda and her daughters, Leah and Violet.

He was preceded in death by his parents; wife, an infant sister, Harriet; brother, Alfred; and sisters, Darlene and Delores.

No services will be held, per Bob’s request. Cremation has taken place. Arrangements are in the care of Eddy Funeral Home, Jamestown. 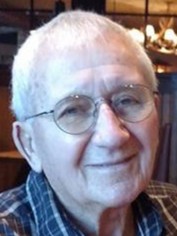